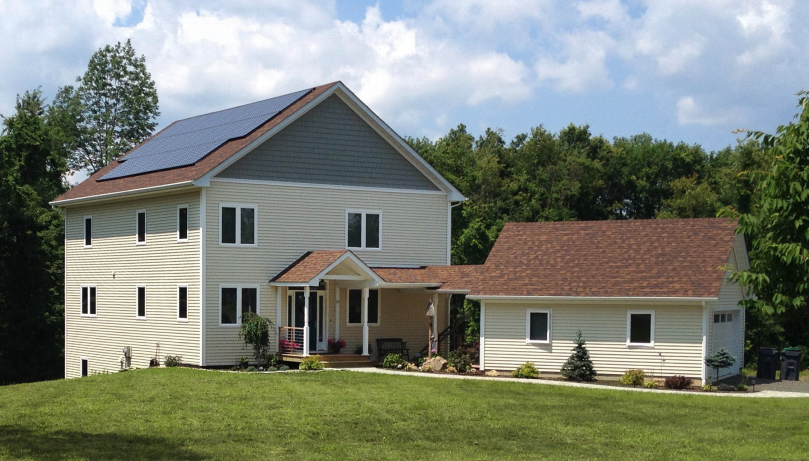 In the state of New York, Lloyd Hamilton has been promoting netzero energy homes (NZE) to fellow Empire State residents since 2002. As the owner of consulting firm Verdae, LLC, located in Rhinebeck, New York, Hamilton soon convinced builder Anthony Aebi, president of Greenhill Contracting Inc., in nearby Esopus, to become a believer—and they have been making history ever since. Aebi built the first net-zero home to achieve a HERS index of 0, built the first development in the U.S. where every home is designed to be NZE, and has now built The Preserve, another NZE development with houses that are at mainstream market rates.

“When I first started working with Anthony in 2007, I was thrilled to be his HVAC and building energy consultant,” says Hamilton, a certified geothermal designer. “We were making history. The original net-zero development was called Green Acres. It was designed for 25 high-end homes in New Paltz, New York, each incorporating insulated concrete form (ICF) construction, solar panels and a WaterFurnace Envision geothermal system. The selling point for these homes was tremendous comfort and indoor air quality, plus an annual heating and cooling energy cost that came to zero. In fact, most of the homes made some money by selling electricity back to the utility—and one resident even uses the electricity to charge his electric car.

“Now after the recession, Anthony called me about a cluster development called The Preserve. He wanted these nine homes to also be NZE, but cost about 20 percent less. That meant finding a way to reduce costs overall, including geothermal installation costs, while improving energy efficiency.”

For affordability, Aebi located The Preserve development in the New Paltz area where land costs less. The remote location also meant municipal water was not available. So Aebi asked Hamilton if each well for each home could do double duty: both to supply domestic water and to serve as a closed-loop heat-exchange well.

From the builder’s viewpoint, Anthony Aebi notes that, “The issue with water-source geothermal is that if anything ever goes wrong with a well, you have to drill a new one. The other issue is that you have to drill a well in the first place. The idea of using only one well was intended to address both these issues.”

The request put Hamilton in a different situation from the 2009 project. “Before, all the homes in Green Acres were on the municipal water supply,” he says. “That meant we had to bore holes averaging 500 feet deep in dense rock for a dedicated closedloop, vertical heat exchange well. Drilling through 500 feet of rock just for the water-source loop is expensive. Anthony figured using one well for both domestic water and a heat exchange well would cut down on drilling costs,” Hamilton continued. “Plus, it would cut the maintenance costs associated with open-loop wells, which typically involve a source well and an injection well that gets bogged down with mineral deposits from return water disposal.

“I did some research and found the only issue with using one well was getting enough room to make the closed loop fit. So we instructed the driller to bore an eight-inch well, rather than a six-inch well.”

Hamilton determined the well depth using GeoLink Design Studio, WaterFurnace’s geothermal design and energy analysis software. He input the load information and the model— in this case, the WaterFurnace 7 Series variable capacity model NV036 with three-ton capacity. Hamilton selected a vertical loop type with one u-bend with an average loop depth of 200’. After inputting the dense rock type and the minimum and maximum loop temperatures, the program determined the depth of the bore.

“We came up with a 400-foot well depth with 100 feet of pipe to the house,” says Aebi. “Doubling those numbers comes to between 875 to 1200 feet of polyethylene pipe in each loop.”

Compared to other closed loop water-source installations, that length is short. Hamilton could get away with the short length because homes in The Preserve have an airtight building envelope, with less than 200 cfm/5o leakage, and high R-value ICF construction, which substantially reduces the heating and cooling load. “I actually see my job more like a commissioning agent for wholehome efficiency,” says Hamilton. “As defined by ASHRAE, that role involves figuring out the owner’s interests and helping them achieve their goals. I understand how the house functions. The shell needs to work properly. The indoor environment needs to be easy to control. The indoor air quality, comfort and durability of the building are assured with a very tight building. All of these factors reduce the load and, consequently, the first cost of the geothermal system.”

As a result of the load reduction, Hamilton notes that he could select the smallest, three-ton WaterFurnace 7 Series model. “New York has incentives for builders who build ENERGY STAR® homes. Talking with the ENERGY STAR program managers at the NY level, they agreed that we could use the 7 Series, even though it is oversized for the load, and rate the energy use based on the speed that meets the Manual J load calculation. I was able to fine tune the operation of the 7 Series using their AID interface tool, until the unit was running at the minimum speed needed. Typically, that turned out to be speed six. “The WaterFurnace 7 Series is designed to fit in so many situations,” he continues. “It has 12 stages of heating and 9 stages of cooling. So for example, it can run at 60 percent of capacity or less and meet the cooling load. The neat thing is, the unit can run at any speed down to one, so you can have it running at very low speed at very high efficiency.”

In this case, the speed reduction achieved an efficiency that is “far beyond the ENERGY STAR efficiency standards,” says Pasquale Strocchia, owner of Integral Building and Design in New Paltz who serves as the HERS Energy Rater (RESNET) and the LEED® for Homes Green Rater (USGBC) for Aebi’s projects.

“The Preserve homes have several energy certifications,” Strocchia notes. “First, they have a HERS index of less than 7. Homes with a HERS Index of less than 15 are generally considered net-zero capable. The HERS index scale goes from 0 to 100. A zero is, of course, a net-zero energy home.

“All of Anthony’s homes are less than seven. The maximum HERS index for an ENERGY STAR home is about 75. So these homes easily meet and exceed the ENERGY STAR requirement. Additionally, Aebi has earned a number of other exceptional green building certifications for his homes, including the EPA Indoor airPLUS, DOE Zero Energy Ready Homes and USGBC’s LEED for Homes.

“In my experience, WaterFurnace has always been right in front in terms of the prevalence of units. The feedback I receive from homeowners with existing systems is generally very positive.”

Chrissy Roth and Al White, who moved into The Preserve on Oct. 21, 2013, have positive feelings. “We knew Anthony had built the Green Acres community in our area,” says Chrissy. “But it was out of our means at the time. We lived in a condominium with a boiler and an air-conditioning system that needed a few window air conditioners, too. It was highly inefficient. Making the move to an environmentally designed home was what we wanted to do.

“Boy, did it pay off. Even in the worst of the 2014 winter, our January energy bill was just $100. And that was keeping our 2,350-square-foot home at 72 degrees for 24 hours a day. This summer our solar PV system is producing electricity, so we expect to have made more energy than we used by October, which shows net-zero energy is possible even 80 miles north of New York.”

Chrissy says they also feel more comfortable. “When my brother and sister visited us, they said it was remarkable to go into every room and have the exact same temperature—downstairs, upstairs, our bedroom, our bathroom, up in the attic—everything was the same. The WaterFurnace system along with the ICF walls and 12- to 15-inch insulation in the ceiling make a huge difference.”

Lloyd Hamilton is pleased to be part of another successful Aebi net-zero project. “For The Preserve development, the loop is the unique thing that I did. We were able to piggyback the closed loop inside the water well. That saved on drilling costs and site disruption,” says Hamilton.

“With the loop being immersed directly in well water, we get high thermal efficiency that takes full advantage of the 7 Series variable speed capabilities. That is important, because we’re in a heating dominated climate. And it’s an environmentally friendly solution, too, because we can just use plain water in the loop instead of glycol, because the well water doesn’t freeze. It’s a win-win-win that worked really well for everybody.”

If you are searching for a company that has a total in-house operation and a proven track record for providing homeowners with all of their WaterFurnace geothermal heating and cooling needs, you can trust Verdae Geothermal. Our company is proud to offer the following services to all of our customers...

Your Expert Geothermal Source in The Hudson Valley